Debbe Tipping has implemented WaterBotics in Girl Scouts camps for the past three summers. Debbe has six years of experience as an educator in informal settings. She holds a Bachelor’s degree in Zoology and is currently Tech Girls Program Coordinator for Girl Scouts of Central Texas. Her students were economically and culturally diverse middle and high school girls. For each of the camps Debbe has led, WaterBotics was taught four mornings a week over a one week period, with other STEM activities in the afternoon. On Fridays, the girls went on field trips to engage with engineers and acquire first-hand knowledge of engineering challenges. When implementing WaterBotics, Debbe was assisted by two middle or high school teachers, one to two high school-age helpers, and the camp was limited to 20 students.

“The design of the WaterBotics curriculum gives the girls a real sense of accomplishment. The scaffolded missions are a unique feature. After completing the first mission the teams felt a real sense of accomplishment and it snowballed from there.”  In Debbe’s opinion, the value of the curriculum for girls in an informal setting is its ability to build confidence: “WaterBotics gets them to do something different; something out of their comfort zone.” She reported that at first the girls were intimidated by aspects of the curriculum, such as the programming. However, once they engaged with the task they reported it was not as hard as anticipated and their confidence grew. Debbe noted that the program not only builds technical skills – critical thinking skills, problem-solving skills, iterative design skills, etc. – but it also strengthens a number of soft skills – learning to work in teams, learning to work in diverse groups, learning to be a teacher, as well as a learner.

For educators thinking of adopting WaterBotics, Debbe recommended recruiting other educators to help with setting up the required materials. Debbe noted that assistance is also useful to support the student teams as they progress through the missions at different rates. Debbe commented on the high quality of the videos that accompany the curriculum. In fact, she thought the girls gained more valuable insights after viewing the video, than if they had just experimented with LEGOs® on their own. She noted that the girls were so engaged that they decorated the pool for each mission. For example, they added coral reefs and bodies on the bottom of the pool for the swimmer accident and mass rescue mission. Finally, Debbe commented that WaterBotics has become a very popular summer camp opportunity and is currently offered by the Girl Scouts of Central Texas in 46 counties. 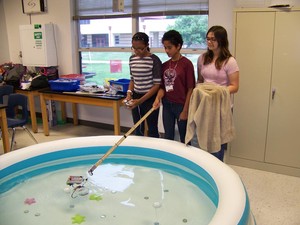